The biggest trends in live event technology from InfoComm 2018

In a series of three blog posts, our Technical Director Jason Brameld reports back from InfoComm 2018, an annual show and exhibition from the Audio Visual and Integrated Experience Association (AVIXA). Read his must-know recaps from InfoComm 2018, featuring developments in meeting technology and consumer electronics technology.

Braving the intense Las Vegas heat, I joined more than 43,000 visitors and 964 exhibitors at this year’s InfoComm 2018. The show brings together big players and their latest product developments from across the audio visual marketplace, including AV and IT, technology, business, live events and audio visual in education.

At Torpedo Factory Group, we’re committed and passionate about using the best possible technology to deliver our meeting, performance and event productions, and I’m excited to share my insight on the latest trends in live event technology with our readers.

Display technology, we mean. The bread and butter of any media show, it was interesting to take in the latest advancements from the big players. One brand that caught my eye was LG, who exhibited their latest OLED video wall screen and “screen wallpaper”, featuring bendy screens and a transparent emissive display that can be stuck on and peeled off. 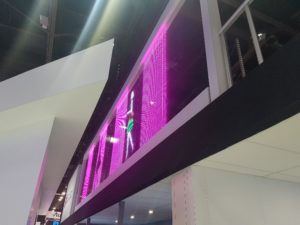 LG also showcased their 88” ULTRA Stretch screen, certified for use with Cisco SPARK room systems. Effectively these are two 49” displays glued together in a single frame, but the result was a pretty smart dual-screen configuration. 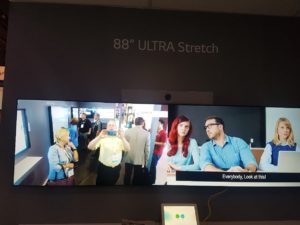 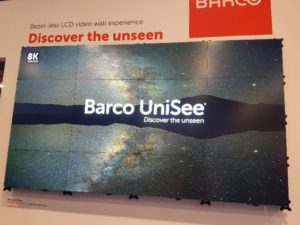 “Big” desktop monitors were also on show, including 4K displays configured for 4 HD images and ultra-wide curved configurations. Making displays better is not just about increasing the number of pixels anymore. There are more standards coming into place, such as High Dynamic Range (HDR), which allow for darker blacks and brighter highlights.

Consider the dynamic range of the human eye – it can go from being able to see in the dark under very low lighting to seeing in bright sunshine. HDR displays aim to reproduce this range on flat panels, projectors and LED displays.

Since there are at least three different ways to do this (Dolby Vision, HDR10 and HDR10+), it will be an interesting battle to observe which type will reign supreme! It’s VHS vs Betamax or Blu-Ray Vs HD-DVD all over again. High Frame Rate (HFR) is also starting to appear, with frame rates being pushed to 120Hz or even 240Hz (from the 50-60Hz we are typically used to).

Everyone is talking about WCG

Wide Colour Gamut (WCG) is coming up in conversations more: with current displays only able to reproduce a portion of the total range (gamut) of colours that the human eye can perceive naturally, WCG is all about getting those displays to produce a wider range of colours. Some of these elements are making it into the content distribution chain now, including digital signage with Brightsign having HDR and 4K compatible players now.

When all of the above are adopted into mainstream display technology, there is the very real prospect of coming close to displaying the full range of what the eye can actually see. If only we can get all the data there, which raises questions on signal distribution (see below). 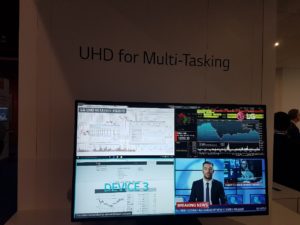 LG’s single desktop monitor with 4 images (not a video wall!)

There were lots of LED displays on show at AVIXA showcasing some innovative developments, including an LED sphere. 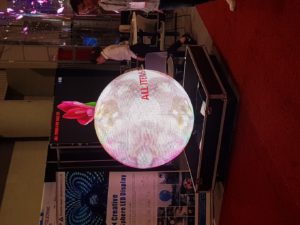 Samsung presented “The Wall”, a micro LED product which is set to become increasingly popular in the large screen market and is tipped to displace the traditional LCD display. As they start to appear in the consumer electronics market, mass production volumes will cause the cost to drop so it will increasingly appear in the professional space. 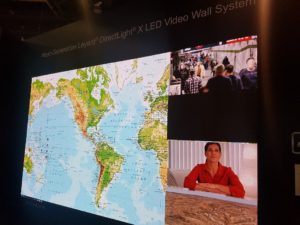 The bright future of the cinema

LED Cinema is an emerging trend of the future with the bright screens of LED displays set to replace movie projectors. Samsung (Onyx), which boasts the capabilities for the viewing distances involved, has just been installed in the first cinema in the US, and Sony with their Crystal LED are hot on the tech giant’s heels. The onset of LED Cinema will also require a change in post-production workflow to allow for mastering the LED format to get colour rendering right, amongst other things.

Digital audio marches on. “Dante spoken here” signs adorned more booths than ever before. AES67 support is growing with Audio Technica adding this to their network microphones. Amphenol have a couple of neat Dante-Analogue converter dongles (single or dual channel) that make it easier than ever to hook analogue-driven kit to a Dante audio system. 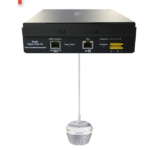 Beamforming (multiple channel) and beam steering (single channel) microphones also continue to develop. Sennheiser showcased Mk2 of their beam steering microphone, and ClearOne exhibited their second generation product which has been around for a while.

A new entrant to this market sector is Biamp with their 3-capsule beam steering microphone which delivers a single channel output via AVB to their Tesira DSP.  The in-ceiling box that this connects to is PoE powered and has an audio power amplifier in it. The fact that it’s only PoE might seem small, but it has a reserve capacitor built in and packed an impressive punch at its demo. We look forward to giving the demo unit a try!

Purchases of immersive audio product Dolby Atmos are also on the rise, and its falling costs mean it will eventually penetrate the home installation market.

“AV over IP” is almost everywhere now as increasing numbers of manufacturers are following early adopters. The likes of AMX by Harman (Samsung), ZeeVee and Crestron, are offering video delivery solutions across a low latency (low delay) network with “visually lossless” compression.

The compression part is important as data rates increase:

That’s a lot of data to move about on a 1Gps or 10Gbps network!

The burden that enhancements to resolution, frame rate, colour and dynamic range can put on signalling systems, from its wiring to its equipment and connectors, under pressure.  A 40Gbps, as Showcased at InfoComm 2018, is a pricey purchase – so imagine the cost of a 100Gb switch!

The challenge to the tech industry

Until there is a drive to mass produce increased data capabilities for other uses, high-power signalling systems remain unattainably expensive, so we’ll have great displays and sources and no way of connecting them together. Just imagine what PowerPoint would be like in 8k!

It remains to be seen how the industry will address this challenge, unless we all move to doing everything on fibre (which some systems do support today) or 100GHz WiFi. Some of the broadcast manufacturers such as BlackMagic and AJA are starting to do more with 12G signals, but the solutions are very much in development.

Pick of the Show

Not unusually for me, my pick of the show wasn’t some super-expensive, mega-flashy, super-powered, wonder-bright product. My attention was caught by a product called Lightform that I think customers will enjoy. Lightform automatically maps 3D objects on a single projector, with plans to expand beyond that in the future.

Lightform is a camera unit you connect to your projector via HDMI that projects test patterns and builds a 3D model of what it sees and sends it back to its software on your computer. You can then load content from their library, or your own content, and map it to different elements in the projected area. The results give you something like the image below, which was projected onto a fairly intricate 3D moulded surface.

Currently marketed at a reasonable price of $700, there are product enhancements scheduled that will allow timeline and cue-based shows to be run and enable use on multiple projectors. Find out more at www.lightform.com. 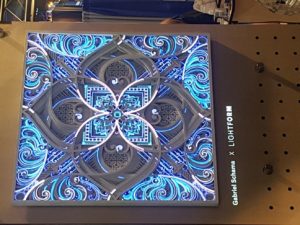 The rise of smaller spaces and the demand for easy-to-use tools and good quality audio definitely shone through at this year’s InfoComm 2018, and the industry is moving to support this. There are still huge strides that need to be made to transfer large amounts of data through signal systems to get the greatest pictures available – watch this space! Check out my next blog post on developments in meeting environment technology.

Recap on the hottest new developments and demos in meeting technology and consumer electronics technology from InfoComm 2018.

Give your event or experience the wow factor
We provide outstanding audio visual and technology services for meeting environments, stage & performance, and hire & event production.
View our services View our services
Prev Next